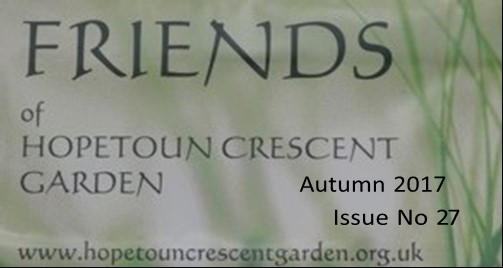 Thanks to all those who contributed to this Newsletter and special thanks are due to Hacking & Paterson, 103 East London Street, for again colour printing this Newsletter for the Friends.

The annual garden party, highlight of our social calendar, took place on Sunday 27th August.  The weather, while not overly hot, was pleasant enough to add to the enjoyment of the event.

As usual, the first on scene were the members of the ‘gazebo team’ who are central to the success of the event.  Since we bought the ‘event shelter’ last year to replace the rather tired and – it must be said  – challenging gazebo, this part of the proceedings has become much less fraught.  Despite the purchase of multiple allen keys, to give each helper one each, it was always an hour or more of concentrated effort and occasional swearing.  These tensions are a thing of the past, and the shelter was raised without insult or injury.

As is now customary, though always marvelled at, the food and drinks were provided by Tony Crolla of Vittoria’s Restaurant, and this year we were delighted that Tony himself stayed to serve us and to chat to guests.  This in spite of the fact that the party took place on the last Sunday in August, and Tony had been working solidly for 28 days feeding and watering the ever-ravenous tourist and Festivalgoing hordes.  His wife professed herself astonished that he was preparing to spend his first day off in a month working when he didn’t have to – but Tony is always aware of the importance of contributing to the community in which he operates his businesses,  and is happy to do so.  Tony was assisted by two of his staff, who seemed to enjoy themselves thoroughly, and more than one guest would now love to visit Sicily!

Entertainment was provided by our old friends the ‘1761’ jazz band who were as lively as ever, – all retired and well over 70! There was an excellent mix of old faithful and new friends, and several families joined the Friends instantly. We were really pleased that Deidre Brock, our local MP, Ben Macpherson our MSP and Councillor Susan Rae had found the time to come, as we know how busy they are.

Bill, a founder member of the FHCG, died in September after a long illness. For many years he was the brains behind the putting up and taking down of the “tired old Gazebo”. We send our sympathy to Maureen, his wife of 65 years and his daughter Adrienne. (cf to Issue No 26)

This annual event, our 15th, was held as usual in McDonald Road library and attended by 17 members. Chair Eileen Dickie summed up the year to September 2017, including:
+ following a restructuring of Parks & Greenspaces, we are now in the North East Locality with a new Parks Manager, Scott Thomson. We have met several times and have a good working relationship.
+ we have retained our Green Flag.
+ our Garden Walk in the RBGE and the summer garden party.
Treasurer Maggie McClure presented the financial picture and this was followed by several questions from the floor.
The Committee was unanimously re-elected and Kathleen Hughes volunteered to join the committee. Any one else? – we have room for more people!
Committee for 2017-18: Chair: Eileen Dickie, Secretary: Christine Savill, Treasurer: Maggie McClure, Andrew Johnston, Mitchell Manson & Kathleen Hughes.
(After the AGM, the Vice-Chair, Bren Knights stepped down as he and Alison will be spending most of each year down south.)
Our speaker this year was local resident and FHCG member Alex Hill (known to many of us as a weather man on STV).

Alex retired recently from a senior role at the Met. Office. His talk was entitled “Weather Matters” and he went on to tell us just how vital the role of weather, and weather forecasting, has been in the outcome of several major events in history, from Henry V’s victory at Agincourt via the defeat of the Spanish Armada, failed campaigns of both Napoleon and Hitler in freezing cold Russia up to the crucial decision to bring forward the D-Day landings from the 7th to the 6th of June in 1944. This was a fascinating blend of science and history that led us up to the present day and into the future with a brief look at the issues surrounding climate change. I strongly suspect that Alex will be invited back to tell us more. 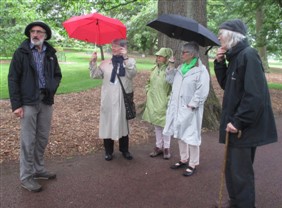 walk, able by FHCG and RBGE guide Jane Corrie. The Linneus Monument, whilst not 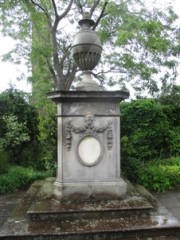 exactly hidden away, can be  easily missed. This was erected by Sir John Hope in the Leith Walk Garden in 1779 in tribute to the Great Swedish botanist who died in 1778.

It is hoped, when funds allow , to place the monument on the line between the Botanic Cottage and Inverleith House.

The inscription on the monument reads,

Improvements to the Garden

Flagstones were laid around the Interpretation Panels for easie

And a new path was laid between the middle gate and the path next to the Huntingdon Place railings. 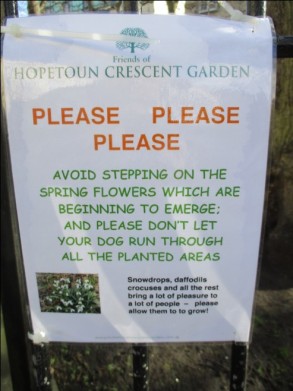 Every year we encourage users of HCG to respect the emerging spring flowers – without a great deal of success! Why throw sticks and balls into the spring flowers for dogs to chase after?
And, what is the point of picking up the dog poo if one then leaves the bag lying around? We’re pretty sure that the culprits are not members of the FHCG! 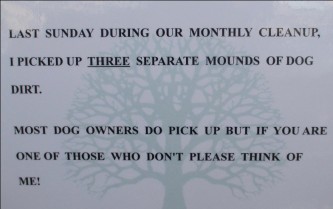 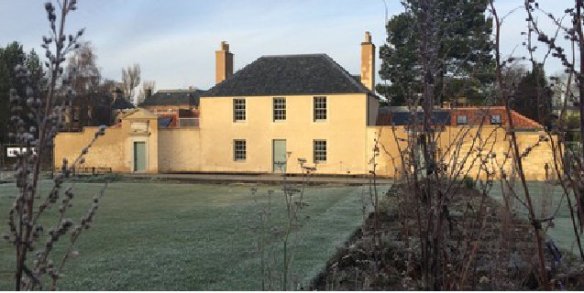 A great chance to explore a piece of Edinburgh’s history. 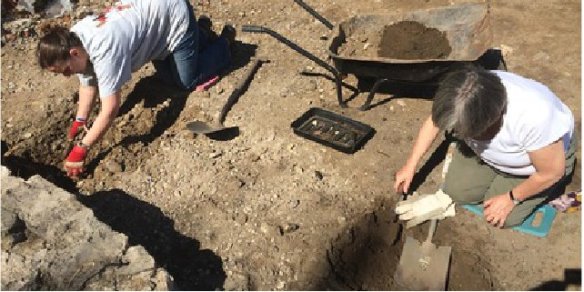 Click for Gallery, Much thanks to RBGE. @BotanicCottage for more pics.

In the Scotsman Friday the 28th August; a nice touch to top out the Botanic Cottage in the RBGE. 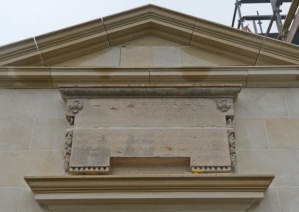 A memorial stone in honour of John William on the Botanic Cottage. Picture: Neil Hanna 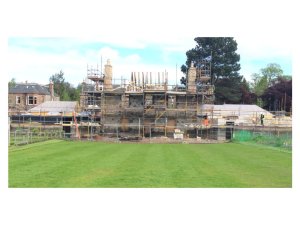 .One up to the Herald, a nice article on the Botanic cottage and the friends

Friends of Hopetoun Crescent Garden
Create a free website or blog at WordPress.com.